Ruminations: Stay in the Box ‘til the Box disappears

Dojos grow old just as people do. Though I practiced in several dojos it was basically the same core of people for over 30 years. Give or take a decade, all the people that have stuck to it 'til black belt have done so for over 25 years. Most "new blood" has come ... and gone. Of course, new people do come and stay, but not in the numbers they used to when I began. I can trace over 20 black belts back to my early years, no other generation of black belts can claim more than 2 or 3.

They say it takes 25 to 30 years to create a sound black belt sensei. Imagine the collective and individual energy involved. The time and effort. Black belts don't sprout on trees, they grow and evolve from the dojo experience. White belts are seeds in the ground that the sensei and the dojo in general water and tend, much like a garden (Miyagi's garden dojo!). Some sprout, some do not. Some grow this way and that. Once or twice a sapling has the traits of a strong tree. It roots sink deeper, its branches expand to loftier heights.

I've talked about the heir apparent, the one the sensei, and the dojo in general, believe to be the one to take over. They are young, skilled, and a wonder to the eye. Yet they leave. The naturally talented karatecas are like thoroughbreds, and like them are moody and hard to control. They abandon the dojo full of promise...that as soon disappears. Talent is sometimes fickle. The ones who persevere are the garden variety workhorses, who do not win the Derby but know their way around the farm. They toil with no apparent praise and the only reward is to awake to another day of hard work.

Karatecas of over 30 years experience are mostly dojo trained and dojo bred. They endlessly do the katas and kumites and bunkais..and one day they end up just doing katas. They may have been in street fights and maybe not, mostly not. They gather, as they have for years, in some sweaty dojo floor and do it all again .. and again ...and again.

Some say this is the Box, the Box you should, as soon as possible (2 years if not sooner) break away from to truly attain that purity of non-purity, that savage essence of the real when karate didn't even have a name for itself ... and just was. A no mumbo jumbo poke in the eye sort of thing. When men were men, and women, well, were women.

But just think of all those who stayed in the Box 'til the Box disappeared ... and were then truly set free. Like the old workhorses put to pasture and sent kicking through the high grass.

Posted by Jorge Morales-Santo Domingo at 8:58 PM No comments: 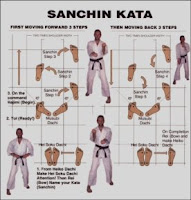 Forms give texture to experience, they formalize it. Life is formless in its essence. Man sees patterns, links, and concocts a form. This is art. As in any art, the martial arts formalizes the experience of its practitioners in forms. To remember. To commemorate. This is kata: a form with pauses and continuum, sometimes imperceptible, sometimes not. Corporal arts like karate traditionally abide by stricter canons, a need for canon is inherent to the art and divergence only begets further canons. Every martial art has its own vocabulary, its own alphabet. Within each, the skeletal form, the origin, is always perceivable within the variations that each practitioner brings.

Any art requires an apprenticeship, a period of observation, copying, learning (beginner, intermediate, advanced). Then, when does one become a martial artist? When is the arc complete? When does one pass from merely fighting to martial combat?

Does combat define the martial arts? Partially. Is winning in combat a validation? Who is to say.
Posted by Jorge Morales-Santo Domingo at 8:19 AM No comments: 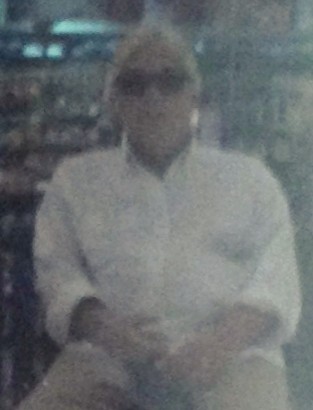